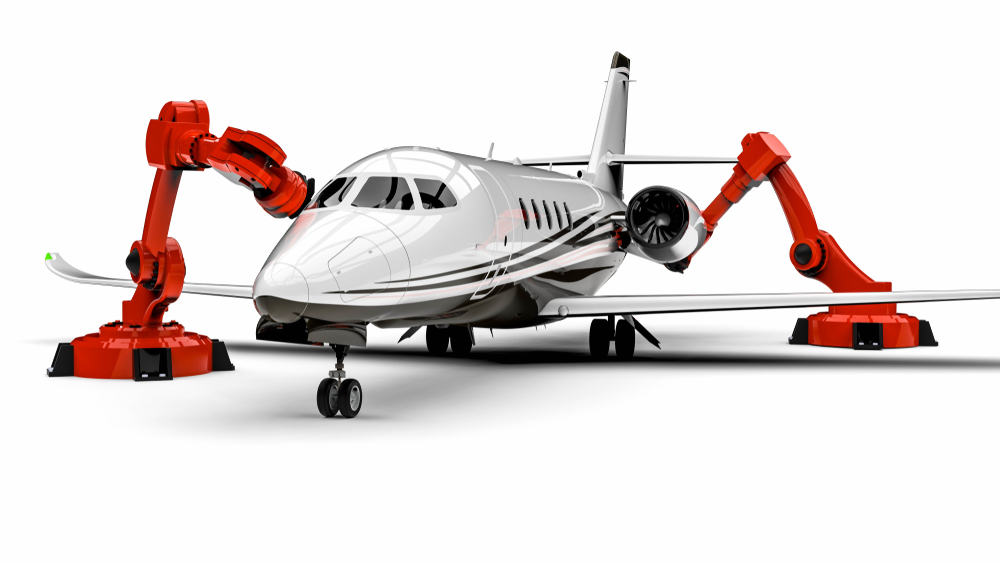 The COVID pandemic hit the aerospace sector hard. Yet the picture is not uniform. On the one hand, Reuters reported that Delta Airline's revenue from higher-yield premium cabins only rose to 77% of the pre-pandemic level during the first quarter of 2022, up from an abysmal 27% a year ago. And according to a Deloitte report, it's predicted that demand for commercial aircraft won't recover to its pre-pandemic levels until 2024.

On the other hand, the market for private jets is booming. Forbes reports General Dynamics Jet Aviation's president said sales of its airplanes are nearly 20% ahead of pre-pandemic levels. Wealthy passengers are seeking to avoid crowded airports and planes. There's a shortage of private jets.

In addition, demand for defense and space aircraft remains stable, so not all manufacturers are adversely affected.

Quality in manufacturing airplanes can be a life-or-death matter. So, robots would appear to be a perfect fit to help with making aerospace vehicles and equipment. Yet aerospace is characterized by low volume in comparison with automobile manufacturing. The kind of robots that have worked well for decades for automakers are not well-suited for aerospace. It wasn't until recent years that robots became flexible and capable enough to be widely used to make airplanes, helicopters, and other aerospace vehicles.

Now that robot adoption has occurred, many aerospace companies can't imagine life without them. Using robots has become the new normal. Many new applications have emerged, and the growth potential is vast.

Let's explore some of the top applications for robots in aerospace manufacturing.

The most common use of robots for aerospace manufacturers is drilling holes. In aluminum, rivets are stronger than welds and easier to inspect. Rivets are tighter than screws and don't loosen with vibration. Welds can weaken under extremes of heat, and rivets don't. So rivets are widely used. For example, a Boeing 777 takes over 60,000 rivets to assemble.

To manually drill those holes takes a tremendous amount of skill and experience to achieve the necessary levels of quality. And drilling manually requires multiple steps, including starting with a pilot hole. The next step is drilling to the total diameter and finally reaming the hole. Then, there's the riveting itself.

Robotic drilling can be accomplished in a single pass.

With computer vision and mobile capabilities, robots can make the holes and insert the rivets in a fraction of the time it would take a person, and with a higher degree of accuracy. 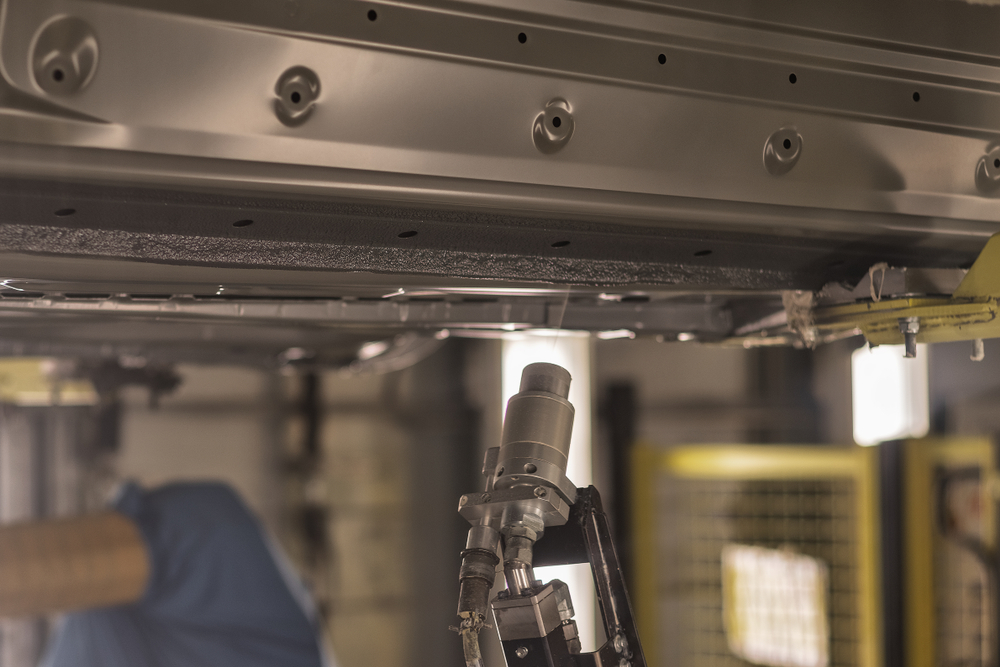 According to Aerospace Manufacturing magazine, applying sealant to aircraft structures is the second most common manufacturing process in aircraft production after drilling and riveting. Until recently, this process has been done mostly manually. After several years of research and development, robotics systems can now carry out this task with a high degree of accuracy to assure absolute quality of the seal. Time savings of 20% are reported from the automation of this task. 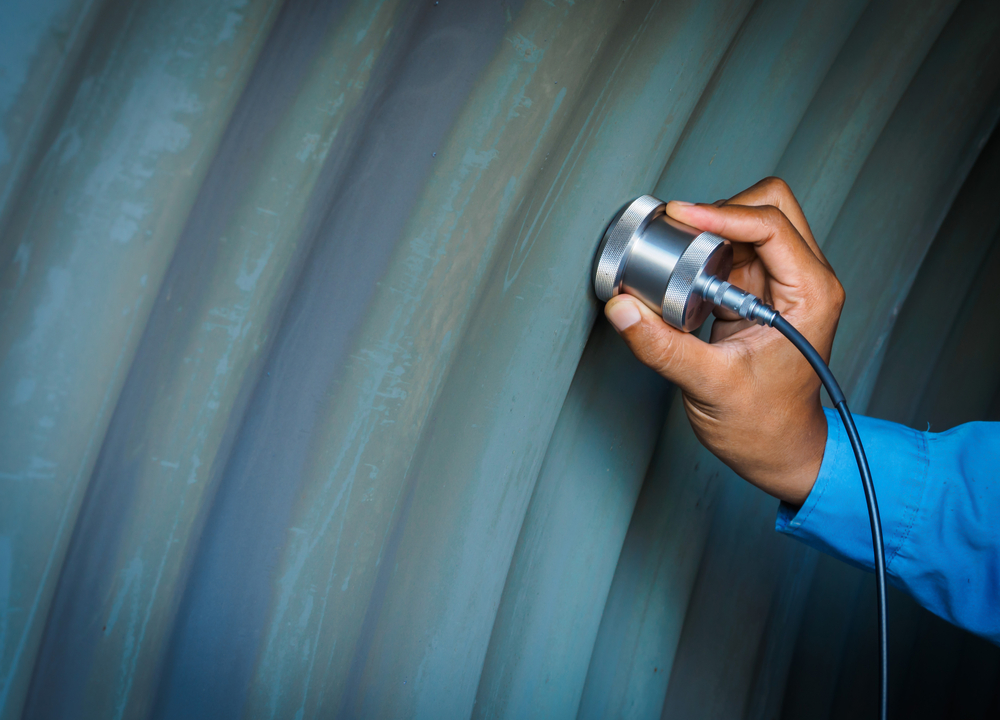 Equipping a robot arm with an ultrasonic, non-destructive testing end-effector enables the robot to perform inspection tasks. Such testing is crucial for quality assurance during manufacturing and also periodic inspection of active-duty aircraft.

If a person were to inspect tens of thousands of rivet holes, they would most likely develop sensory fatigue. Robots don't have this limitation and can also conduct inspections autonomously during the night or other downtimes. The ability to schedule unattended inspections contributes to higher productivity.

Airplanes, helicopters, and other aerospace vehicles are much larger than automobiles. Welding such large parts often requires multiple welders and can be hazardous. Complicating matters further, exotic materials like titanium and nickel-alloy require more advanced degrees of welding skill.

Highly skilled welders at the top of their field are in short supply. The Welding Society projects that by 2024 there will be nearly 400,000 welding vacancies in America. The demand for welders is growing by 4% per year, and the number of welders is decreasing by 7% annually. 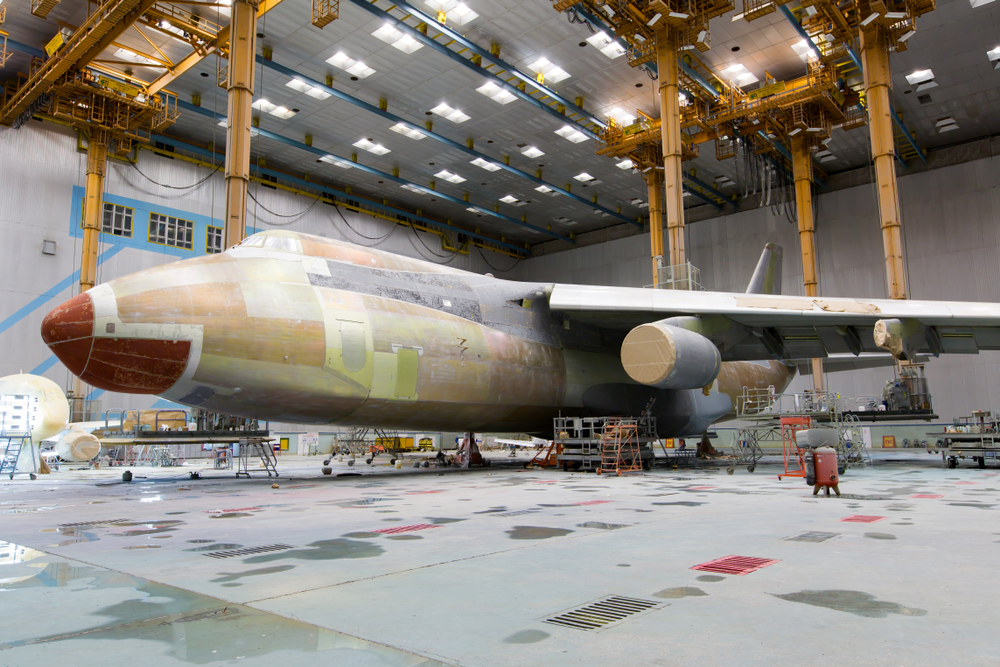 Robotic painting of airplanes and other aerospace vehicles carries many advantages. Robots are faster, more accurate, and more capable of repetitive motion, and they can simultaneously apply different kinds of paint at different thicknesses.

Harmful fumes are a problem for people when painting, so robots improve safety.

A robot arm can sand a portion of a fuselage and then change its end-effector to perform washing. The same robot arm can switch its end-of-arm-tooling (EoAT) again and dry the piece. Next, painting and polishing can be carried out by the same robot.

Such versatility is crucial for the aerospace industry, characterized by a low production volume. It would be cost-prohibitive to have specialized automation equipment for each task. Modern, flexible robots enable aerospace manufacturers to automate many tasks cost-effectively.

Washing in-duty aircraft is vital to reduce corrosion and improve the lifespan of the plane and its safety. Manual methods involve a crew of people, sponges, rags, and ladders. Using robotics, the time required to wash a plane can be reduced by 95%, and a drive-thru aircraft washing system is made possible.

Moving large pieces of airplanes around in a factory is challenging and hazardous. Modern automated guided vehicles (AGVs) are equipped with sensors that enable them to detect when people are nearby and in harm's way. Because of vision systems and other sensors, such giant, automated transportation robots can quickly and safely reposition aircraft components even with people in the vicinity. 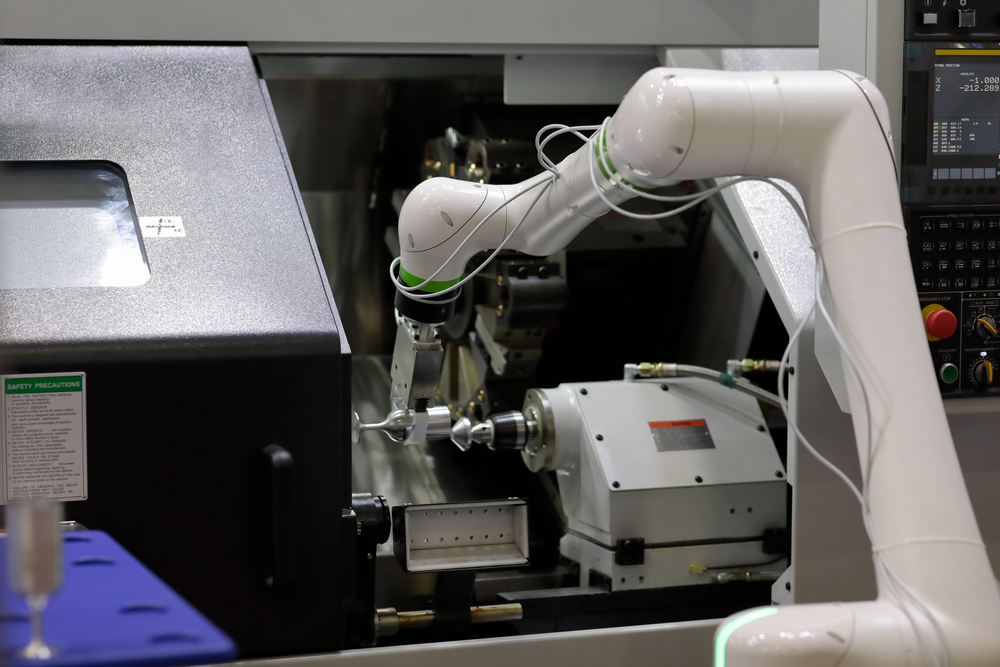 A work cell consisting of multiple CNC machines and one machine-tending robot arm can completely automate the manufacturing of a part. The robot coordinates with the CNC machines by removing the workpiece after an operation is complete. The arm then inserts the piece into a different CNC machine in the same work cell for another operation. The same robot can also perform quality inspections of the finished parts. If the piece doesn't meet specifications, the robot puts it into a quarantine bin.

Computer vision is critical to the successful implementation of such a system.

Robots increase the quality of the components that go into airplanes and the excellence of the finished product. Companies increase the productivity of their employees by using robots. Just as one farmer with a tractor can do the work of a hundred farmers without one, so it is with robots and manufacturing.

Aerospace manufacturing is distinguished by its huge components and pieces, many of which can weigh multiple tons each and cover large surface areas. Manual processes that involve climbing up on a fuselage or a wing are inherently hazardous. Even moving such large objects carries a high risk. Robots improve the safety of the workplace.

Robots enable digitalized workflows. Traceability is increasingly crucial. Keeping track of test results from quality assurance and inspection is made easier and faster when using robots. Much of the data collection can be completely automatic.

Challenges and Risks When Considering Automating

Implementing robotics comes with a high initial cost. The return on investment must be carefully considered before launching an investment in robotic automation. A low volume of end products characterizes aerospace manufacturing. However, each airplane, helicopter, or other aerospace vehicle consists of millions of parts and thousands of sub-assemblies. Consequently, many processes are repetitive and are therefore good candidates for robots to perform.

Even so, compared with automobile manufacturing, it is notable that aerospace manufacturing has a lower standardization of parts and is more complex and less repetitive. To be cost-effective, perhaps one robot will need to perform multiple tasks. Investing in a multi-purpose robot may yield a sufficient volume to justify the investment.

In addition, many aircraft are assembled in a modular way. Components may be made in many different locations and by various organizations and brought together for the final assembly. Such modularity makes automation more challenging.

While navigating the automation landscape involves difficulties, many aerospace companies have implemented robotics and now consider them indispensable.

HowToRobot is here to help you on your automation journey. We make it easy to compare various solutions – risk-free and anonymously. Use our free Quote Tools to receive offers for your potential projects today.

It is often helpful to talk with people who have seen companies similar to yours successfully implement robotics. Although discussing things with vendors can be valuable, sometimes a more impartial viewpoint is needed. You can reach out and confer with an unbiased and knowledgeable advisor who can provide assistance.

To help in assessing the value of a robotics solution, HowToRobot offers an online investment calculator to assist in estimating savings and ROI.

One of our customers commented, "We used to think that robots and automation solutions were out of the question for a smaller company like us. This program has completely changed our view on automation. When there is a structured approach to follow and advisors to trust, we don't have to be the robot experts. Now we know what we can achieve from automation – and how to get there."

You may know precisely what you want, yet find it time-consuming to seek out relevant vendors and contact each of them. To help with this, HowToRobot has the world's largest directory of robot suppliers. You can search our directory for your application and get a list of relevant vendors in no time.

You may have an application in mind but are unsure if the technology exists and is mature enough to address it. Or you might be unclear on how to translate your needs into proper requirements for suppliers. If you'd like to confer with an expert with years of experience in implementing robotic solutions, HowToRobot provides advisors who can help. 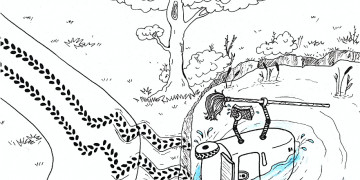 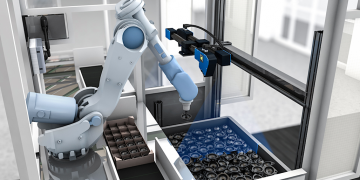 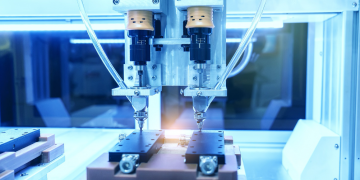 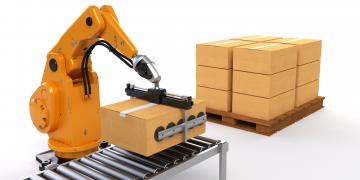 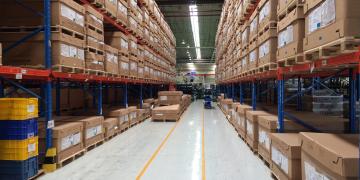 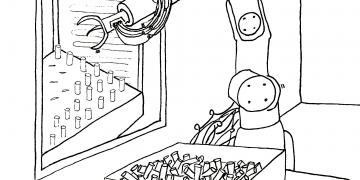 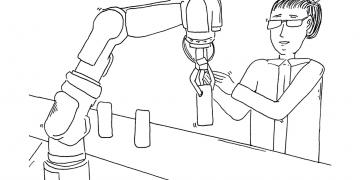 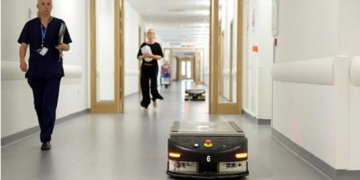 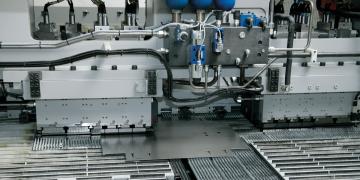